If you sell B2B, you need a skilled and experienced B2B sales lead generation agency who knows how to turn cold stones into hot rockets. Young Company has been delivering cost-effective results to industry titans and incubator start-ups for 70 years right here in Southern California.

After WWII, industry rocketed in Southern California and industrial advertising became a very popular strategy for progressive companies to support their sales forces and grow sales. Back then, ads in trade magazines were the most efficient way to reach target markets for all kinds of products and services purchased by businesses. No media company understood the needs of the vertical industrial markets better than McGraw-Hill. Armed with tons of market research and data, they published the core vertical trade magazines with titles such as METALS, PLASTICS, CHEMICALS and ELETRONCIS that helped to shape and define entire categories of business. They also published BusinessWeek magazine to serve executives across all industries in the United States.

Earl Taggart had been the West Coast Manager for McGraw-Hill publications and as such, was flush with industrial clients throughout the 1950 and 1960s thanks to his thick rolodex and his love of golf. In 1949, he left media and partnered with ad-man Doug Young to co-found Taggart & Young, an advertising agency that offered creative strategy and account management to dozens of industrial clients.

In 1983, at the age of 33, Bart Young purchased the agency, then called Speer, Young & Hollander, with a vision of serving the growing number technology companies in the Los Angeles area. Primarily focused on military-aerospace clients, the agency won divisions of TRW, Hughes and IBM. By the end of the 1980s, the agency had dozens of business-to-business clients for whom it provided highly-creative ad campaigns, trade show marketing and direct marketing programs. Public relations was the social media arm of B2B advertising campaigns back then. To keep the messages for his clients relevant, Bart hired PR professionals with engineering degrees to produce award-winning articles and white papers. When the 1990s brought the ".com" business wave, Young Company was well- positioned to provide Internet-based companies with cutting-edge B2B marketing. The agency flourished with tech clients, both local and global. It was during this time that BtoB Magazine recognized Young Company as a top business-to-business ad agency. 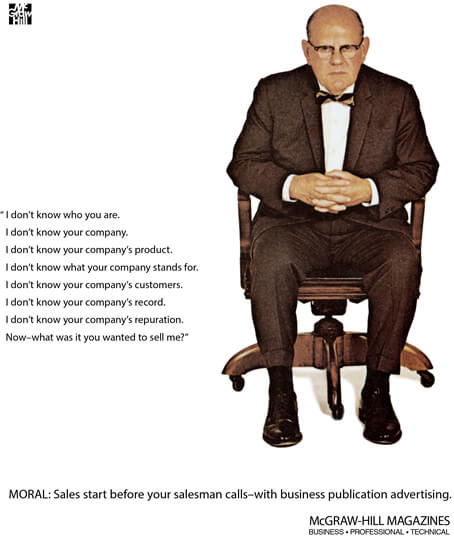 This iconic ad for McGraw reinforces the need for brand advertising. Although primarily for B2B marketing executives, the need for a brand building message speaks to consumer brand managers as well.